Today's March and some advice for Mr Cameron

Us political types find it very hard to look at the other side of an argument unless forced to. Cameron will know what he thinks about today before it happens. He also knew today would come long before he was elected. Any government proposing even a fraction of the cuts this coalition are unleashing were always going to face large scale public protests.

He will, I'm sure feel fairly unruffled about the fact that hundreds of thousands of people will give up a precious Saturday today. They will travel to London from every town and every village of every country of the United Kingdom to give him a message.

I'm sure he thinks he knows what that message is. He thinks that today will be about a minority who want to oppose for the sake of opposing, who just don't want to understand the details of his policies. He knows that just a small percentage of the country will be in London today and I'm sure, believes that these are people who would never vote for him anyway. To him, I imagine they are an amorphous mass of public-sector-worker-leftie-benefit-scrounging-student-radical-militant-crusty-drains-on-society.

I'm also sure that he thinks it's a gift that Ed Miliband will be speaking at the rally today. "Red Ed" eh? First chance to take to the streets and he couldn't resist. Oh how those Tories and Cleggs will laugh at the sight!

I would like, this morning to give Cameron a little piece of advice that I'm sure he'll ignore.

Just 30% of the public approve of your government. Around 60% think you are cutting too far and too fast. For everyone marching today, 100 people sit at home and will them on.

Did you see those oh-so-well-heeled Gloucester ladies on the BBC News last night Mr Cameron? The "Marks and Spencer's 12"? Clutching their petition of 15,000 names, hoping the 12 of them look like 15,000 today. They're marching. When asked about Big Society, they sneered. "This is the Big Society? - No it's the Big Corporate Society (genteel approving claps) and we're all saying no!

Will you see those too ill or too disabled to march today Mr Cameron? Because we'll be taking over the internet and jamming emails all day long.

Will you see the frightened Mums or the desperate Grandparents or the sons and daughters left without hope?

When you sneer at Ed Miliband, do remember those Gloucester ladies and middle-England forest protesters and academic librarians too, won't you Mr Cameron. And remember that he might just be on the right side of public opinion after all.

Most of all Mr Cameron, don't for one minute think that because this is Britain, today means nothing and will come to nothing. Don't for one second lull yourself into believing that today's protest is anything different to protests taking place around the world - in the Middle East, In North Africa, in Europe.

An out of touch leader, acting without a mandate, causing fear and division can be rejected just as surely in the UK as anywhere else. 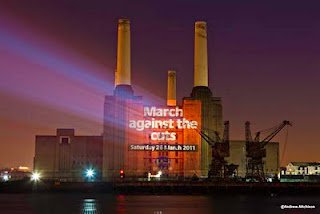