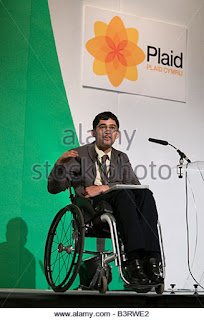 Those of you who remember Broken of Britain, may not remember Rhydian. He was an economist, writer and political activist for Plaid Cymru http://www.theguardian.com/profile/rhydian-f-n-james
That's why I wanted to use the proof image above. Politics made Rhydian's heart race as it makes mine. I think he would have wanted me to use this picture.

In this picture, he looks capable, as he most certainly was. He looks passionate, which he was. And he looks political. Which he was. That he also looks disabled is incidental. I think he'd like that.

It was Rhydian who engaged the first politician to support sick and disabled people through the welfare reform bill 2010. He drafted the first early day motions (EDM) for Hywel Williams. I didn't know what an EDM was. He wrote clear, yet forensic pieces of journalism when the rest of us were still reeling at the headlines. He analysed the detail, picked at the flaws and fed constant ammunition to those banging drums and rallying troops online.

You might notice that none of Rhydian's articles mention that he had Friedreich's Ataxia. So perhaps I won't dwell on it here. Enough to say that following a life that made his heart race may not have been the most self-preserving choice. It is a degenerative nervous condition that slowly chips your life away. Rhydian knew that every day counted and chose to spend some of them as a warrior.

And maybe that's why Rhydian chose to campaign for others. Online, his condition was totally irrelvant. Online, his words spoke for themselves. Online, his unquestionable genius just was. There were many times over the years I found out what someone's condition was after months or years of knowing them and was utterly shocked. It taught me so much about the perceptions of disability and capability and how very wrong they usually were.

The people I met were hysterically funny, sharply cynical, searingly clever and focused on something more than the everyday. Their disabilities were irrelevant beyond the limitations they placed on their ability to produce the work they wanted to. Online, the world can be a level playing field, and I hope that gave Rhydian a sense of liberation for a while as it did me and so many others.