The force of nature that is Dr Eoin Clarke over at the Green Benches has produced this enlightening research on unclaimed benefits. What a shame it is that no-one in politics is prepared to so the kind of hard work to dispel obnoxious myths that Dr Clarke is turning out daily on his unique blog.

Whilst Eoin concentrates on those benefits that can be quantified, sickness and disability benefits are a much greyer area. We can't say how many people do not claim DLA, ESA, Carer's Allowance or any other benefits designed to make our lives more equitable.
We can, however look at the system as it stands. The government would like us to believe that sickness and disability benefits are an easy option. That there are few controls or checks and that claimants can look forward to a life of ease once a claim is successful.
This is absolute nonsense.
Initially, a claimant must fill in forms that run into 40 or 50 pages, detailing every last effect of their conditions in terms that often lead to despair and depression. The descriptors are now so tight that unless you have an advocate or know the terms to use, you will be unlikely to qualify no matter how bad your disability or symptoms.
Once the form is completed, it must be sent off and a long wait ensues. How do people survive in the meantime?
Next, a claimant will be called for an assessment. The assessment is degrading, impersonal and inadequate. Claimants are bullied, judged and patronised, leaving them feeling worthless and guilty, whatever their genuine need. Around 40% of claims are abandoned during this stage. The government would like us to believe that this is because claimants were "trying it on". I think the most pro-reforming reader would accept that a system this harsh is bound to deter genuine claimants and lead to people in genuine need giving up.
Once the claim is processed, it is very likely to be turned down. 40% of claims then go to tribunal with up to 80% being upheld with advocacy. This however is not the end. Within weeks of a successful appeal, another brown envelope falls through the door and the whole process begins again.
Anecdotally, I don't claim DLA though I do qualify. It is too dispiriting, too badly designed and made me feel like a fraud when I did claim it. My husband refuses to claim Carer's Allowance or other benefits as he wants to support his family through work.
Any politician with any integrity would challenge this system. They would be concerned that those in genuine need are not getting the help they need and deserve. They would make plans to increase take up, not reduce it and combine these with policies to actually help those sick and disabled people into work who would like help. Work Programmes are an abysmal failure, because politicians have focused solely on the stick with no thought at all for the carrot. There are no flexible working schemes that could actually fit around our disabilities, educational alternatives are rarely offered at the point of claim, entrepreneurs are not supported, co-operatives have not been developed - we are simply expected to fit into an existing work system that does not want us and cannot or will not accommodate us.


Over to Eoin.....
Stop Bashing Benefit Claimants when £66 billion goes unclaimed per parliament 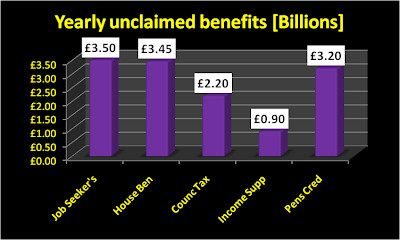 The graph above shows the amount of unclaimed yearly benefits in billions of pounds. The total unclaimed for the current year is £13,25billion.  The graph above is based upon my own calculations. I took the top end 'take up' rates recently published by the DWP of each of these five benefits. I then calculated those who did not 'take-up' the benefit by the average yearly entitlement of each benefit. For example only 86% [top end] took up Housing Benefit. The average HB weekly payment is £84.50.  So you multiply the c.744,844 non claimants by £84.50 times 52. That gives you c.£3.45bn in unclaimed Housing Benefit Payments per year. The same exercise was repeated for all five benefits. Sources: A host of DWP statistical bulletins and cross tabulations as well as ONS data]
Posted by Sue Marsh at 12:23