I LOVE this project. In a few minutes, I'll post my own "Bedding Out" video for you all to see. It's remarkable how personal it feels, how vulnerable I felt recording it. And that's why I think this project is so important.

"Bedding Out against the onslaught


At the beginning of April, I am moving body and soul into bed for 48 hours round-the-clock, exhibited behind a red rope barrier in a public art gallery

Bedding Out is a response to the welfare benefits overhaul, which threatens many with poverty and with a propagandist campaign that has seen disability hate crime leap by 50%.

The work looks at the way I live a life in two very separate parts. There’s a public self that tries to be outgoing and animated and changing the world, and most people assume because that’s what they see of me, that’s how I am in the rest of my life. But then there’s the private self, which wins no friends or accolades, in which I spend most of my time at home, a lot of time lying down and quite a lot in bed.

This is the self that I have become very expert in concealing. And whilst that has kind of worked for the past 30 years, in the face of benefits changes, it no longer does. Instead, this new system demands that I reverse myself, parading the private me to justify support.

In the performance I take this private self and make it public, performing my bed-life. Since the public me is so carefully constructed, this is a kind of un-performing of my self. I want to make visible a twilight existence shared by thousands of us. But even more, I want to show that what so many people see as contradiction - what they call fraud - is just the complexity of real life.

Bedding Out can portrays the human story set within its broader social context. The work is not just about me, but is a symbol for the thousands of us who live a bed-life. There is something about playing it out in a public space that goes deep to the heart of what that life means, setting it overtly within the present, very difficult political, climate. 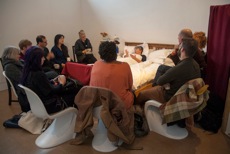 At points throughout the performance, members of the public will be invited to Bedside Conversations, gathering round the bed to talk about the work, its backdrop and its politics. Previous conversations ranged far and wide across benefits, newspaper propaganda, hate crime, art as activism, and much more.

You can get a flavour of the work from ‘Reflections from the Bed’ - a short audio-visual slideshow (with captions) that tells more about the work and why it feels so necessary.

And because, at last autumn’s version of this performance, I was contacted by several people delighted that the work was making them more visible, but too ill to attend in person, this time, Bedding Out will use social media to involve absent people into the conversation. 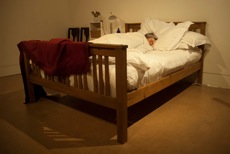 How you can get involved

Watch Bedding Out! The performance will be live streamed throughout the 48 hours at www.roaring-girl.com.

Follow the work – and join in! We have tweetmeister Dawn Willis (@quinonostante) tweeting in the lead up to the performance and in residence throughout the 48 hours. She is tweeting live updates on the performance, audience reactions, issues of the day and Bedside Conversations, and responses to individual tweets, bringing people into the bigger conversation and encouraging them to make the project their own.

Tweets will be fed into conversations and displayed live in the arts centre alongside the performance.

There will also be an all-twitter conversation on the Thursday at noon, with over 50 people already signed up to take part.

If you’re in Salisbury, come to the Arts Centre! Opening hours and access information at: http://www.roaring-girl.co.uk/productions/bedding-in/show-times/

My hope is that people will come to see Bedding Out, pitch in via social media, use it to talk to people new to the issues raised, use it beyond the gallery space and after the performance is over. I hope the work will be part of the much larger conversation of disabled people, supporters, the Sparticus campaign, DPAC, Black Triangle, UKUncut and others, our combined voices reaching more people and generating public outrage to force a change in benefits reform and cultures of work towards a system that is humane."